Did you know that there are over 400 varieties of potatoes grown worldwide? A huge portion of these are grown in South America due to the high elevation. You’ll find tons of potato dishes in Peruvian and Brazilian cuisine.

Potatoes are easily the best food in the entire world. Nothing beats a fried, golden chunk of yummy potato. I don’t even know how to describe how much I love potatoes. They are also a food enjoyed by quite a variety of people. Vegans, vegetarians and meat lovers can all come together on this one. They are so versatile, but sometimes its nice to go back to the basics, and perfect a super simple recipe.

These potatoes are hand-down one of my favorite things to make. All you need is about 25 minutes and two ingredients to transform a regular old potato into golden, hot, crispy deliciousness.

for the crispiest potato

The trick to a crispy potato is to minimize the amount of moisture on the outside of the potatoes. Now, it is important to do this while also maximizing the moisture on the inside of the potatoes so that they are soft and tasty on the inside. To do this, we will not be deep frying. Instead, we cover the bottom of a shallow pan with olive oil. This way, the potatoes have the opportunity to cook longer, meaning that they will retain their inner moisture.

Now, to make the outside as crispy as possible, it is important to not crowd the potatoes in the pan. By giving them all space, and not allowing them to touch, moisture will not be transferred from the one potato chunk to another. It is also important to dry the potatoes before adding them to the oil, to reduce the water on their outsides. Also, dry them off quickly after they are done cooking, so that the oil doesn’t sit on them and soak the crispy outside layer.

Two ingredients makes this recipe sound super easy. That’s because it is. It is easy to feel daunted by the idea of frying potatoes, however, its no different than browning meat or making pancakes

In fact, I like to think of this recipe as the pancake equivalent of potatoes. Pan-french fries if you will. Easy and delicious.

Potatoes are almost exclusively carb with some water content. The olive oil adds only fat, almost no protein in this recipe.

Start by cutting the potatoes into small cubes, The smaller the cubes, the crispier the final product will be. I tend to stick to half inch chunks for the perfect level of crispiness.

On a wide and shallow pan and on medium heat, add enough olive oil to cover the bottom of the pan. Allow the oil to heat up for a few minutes.

Dry the cubed potatoes thoroughly and add them to the pan. DO NOT crowd your potatoes, this will make them less crispy and more soggy. Allow them to cook evenly on all four sides by stirring occaisonally for about 20 minutes or until they have shrunk significantly and are a golden brown color.

In a bowl, place a few layers of paper towels. Then, transfer the potatoes to the bowl with a slotted spoon as to not soak up too much oil.

Now, toss the potatoes with salt (or any seasonings you would like) and enjoy with ketchup!

Get the Latest Recipes! Join our newsletter. 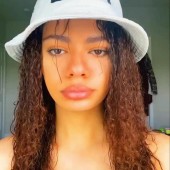 Hi! I’m a nutrition major at the University of Maryland specializing in sustainable packaging research. I’d love to teach about living healthier as I learn.